Undoing Racism Austin is a collective effort by a group that includes artists, lawyers, community organizers, educators, and neighborhood activists. We are committed to Austin’s strong and equitable future by eliminating the very real and painful racial inequities in our City and in people’s lives. Undoing Racism Austin is a new initiative supported by ACT that is focused on organizing trainings with the Peoples Institute for Survival and Beyond on how we can undo racism and build a city rooted in racial equity.   November 8-10, 2013 was the first training. We’re growing fast. Learn more here: undoingracismaustin.org. 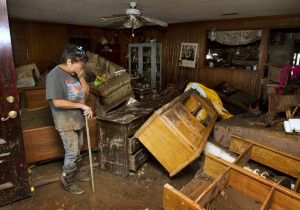 On Halloween 2013 in Austin, TX, the waters of Onion Creek rose at an alarming rate.  The creek rose 23 feet in 3 hours when the flood gauge stopped working. It was a few hours later that the first 911 calls started coming in, and another hour and ½ before the police responded.   This was after the creek crested at 45 feet with almost 1000 homes flooded. 600 had major damage. Within Travis County, 5 areas where hit, with the Onion Creek Park/Yarrabee Bend area being one of the worst.   This community also happens to be very multi-racial and lower income.  Five people were killed, along with 44 horses from an Equestrian Center, dozens of goats and around 1000 chickens. Like all disasters, the recovery will take a long time. With close to 300 homes uninsured, many with children, rebuilding when you have lost everything can be overwhelming.

It is funny how things happen in one’s life. I started a Tai Chi class this September with Dr. Gu. He was the acupuncturist that helped me reclaim my body from a few years of chronic pain. So now that I am doing better I thought this could be really good for me so have jumped in. A women named Ruth supports the beginners and I learned that she lived in Onion Creek. When the floods happened, I was concerned she might have been hit, and she was, but fortunately not so bad. She can still live in her home.

Because we had a connection to a resident, we were able to get into the neighborhood to begin providing the immediate support of cleaning out homes. We began to organize together, and to make things easier we adopted the name Austin Common Ground Relief and we have been organizing ever since. ACG has been provided hot food everyday through the Thanksgiving holiday and we continue every weekend. We hosted a neighborhood party where we cooked 30 chickens, set up a free store, and had live music, a kid’s bouncy house, games and more! We gutted a number of homes and did daily distribution of food or donated supplies.  We have been doing what we can to access as much stuff as possible to re-distribute as much as possible as soon as possible. Many families continue to live in gutted homes with no gas, oven, or refrigerator. We have prioritized homes with kids, elderly and single parents.

The other day as I distributed food, a young girl in her early teens came over with her little dog.  As a car neared she was super concerned about her dog. She told me he was the only one of their 7 dogs that survived. She had been in her bed when her house flooded and is still not really able to sleep well. So many young ones had their worlds turned upside down.

Like many disasters, people want to help, and lots of money goes to Red Cross. Within a week or so after the flood, the Red Cross was gone from the area, and now without a federal disaster declared for individuals, people without insurance are in trouble. ACG is supporting the residents in organizing their neighborhood in order to support the Long Term Recovery work that lies ahead. While it is only a few isolated neighborhoods that were hard hit, many in Austin are oblivious to what has happened. ACG will do what we can to insure that justice prevails in the recovery of these communities. On June 25th, Wendy Davis engaged in a filibuster to stop the ALEC-backed Republican drive to strip the people of Texas of their access to abortion and other reproductive health care.  I was in the Capitol Extension when the Republican’s third attempt to shut her down succeeded and women spread throughout the building surged toward the Senate Chambers.  We began to roar.  Over the next few minutes, history was made. The proceedings struggled to continue, stymied by the noise. Though a vote was finally taken, it was after midnight and the session was technically over.  Confusion arose, so the Republicans changed the clock to say the vote was complete by midnight and the Second Special Session was closed. This is how it goes down in Texas.

Luckily, some trusty photographers had photos of the vote and the clock and were able to prove that David Dewhurst was lying.  So the Republicans were forced to call a Third Special Session that would require hearings and action by both Houses again.

It was here that a new phase of work began. ACT initiated a meeting with close to 70 people from many groups who agreed to form an anti-racist, anti-oppressive, reproductive justice direct action initiative. Rise Up Texas was born and quickly began to organize to include those voices previously left out of the debate and to prepare for nonviolent action.

Rise Up worked hard to coordinate and collaborate with all the various forces, but found ourselves marginalized again and again. What a shame. Opportunities like this do not often arise and when they do, it is so important to pursue them. In the end it became clear that our goals were different.  The more mainstream groups saw the filibuster itself as the victory and began working to position Wendy Davis to run for Governor.  Our goals were to make sure that the Legislators and public new about the impact on poor, rural, and marginalized communities, and show that the people of Texas were not going to take this lying down but that we were rising up and fighting back.

The stories go on and on about all the hearings and testimonies, the all nighters, the great actions – shoes, drums, letters and more, singing “We’re Not Gonna Take It” as an anthem, tampon-gate, Dewhurst lying about protestors smuggling in shit, that they completely missed the chains that allowed some brave young women to lock down with painful images of the consequence of illegal abortions.  Then there was the nonviolent sit-in, dispersed brutally by police, several were tased and two were taken to the hospital, one needed for stitches in his head.  There has been no consequence yet for any of this. Despite the brutality Rise Up mobilized when the Governor prepared to sign the bill into law – we silently held the space for those who could die as a result of their actions and then we wailed and wailed so he could not sign the bill in peace.

Our work made international and national news with stories and images in major dailies and new station.  The women of Texas did not take this lying down and we are continuing to organize to turn this around.

The Occupy Movement continues a tradition of nonviolent direct action.

From the Alliance of Community Trainers, ACT

The Occupy movement has had enormous successes in the short time since September when activists took over a square near Wall Street. It has attracted hundreds of thousands of active participants, spawned occupations in cities and towns all over North America, changed the national dialogue and garnered enormous public support. It’s even, on occasion, gotten good press!

Now we are wrestling with the question that arises again and again in movements for social justice—how to struggle. Do we embrace nonviolence, or a ‘diversity of tactics?’ If we are a nonviolent movement, how do we define nonviolence? Is breaking a window violent?

We write as a trainers’ collective with decades of experience, from the anti-Vietnam protests of the sixties through the strictly nonviolent antinuclear blockades of the seventies, in feminist, environmental and anti-intervention movements and the global justice mobilizations of the late ‘90s and early ‘00s. We embrace many labels, including feminist, anti-racist, eco-feminist and anarchist. We have many times stood shoulder to shoulder with black blocs in the face of the riot cops, and we’ve been tear-gassed, stun-gunned, pepper sprayed, clubbed, and arrested. END_OF_DOCUMENT_TOKEN_TO_BE_REPLACED

ACT trainers have been busy doing trainings in New York, Washington DC, Austin, TX, San Francisco, Los Angeles.  We have been mentoring organizers and trainers in many other cities including Oakland, Albuquerque, Baltimore, Philly, and Chicago!  We are working in collaboration with many other trainers networks and organizations to build best practices, provide trainer support and gather common training materials and resources.

Organizing for Power, Organizing for Change is Lisa Fithian’s website of training notes and resources.  The website is a rich library of materials for organizers, trainers, educators, and anyone wanting to learn more about social movements and creating change.  Visit organizingforpower.org to learn more.

Education for Occupation is a website to support the growing occupy movement.  The information is organized under foundational pieces needed to build a strong and healthy movement for the long term. Visit educationforoccupation.com to learn more.

EAT began in late 2000 when author and activist Starhawk and permaculture designer and master teacher Penny Livingston-Stark asked some new questions: “What can permaculturalists and activists learn from each other that would make each more effective? What skills do people need to know in order to really ‘save the planet’? How can we teach these skills in ways that ripple out to others?” Penny and Starhawk combined their many years of knowledge and created the first Earth Activist Training, held the following spring in 2001. EAT took root and flourished.

The Alliance of Community Trainers is a small collective that works with broader networks of trainers, allies organizations and projects. ACT offers knowledge, tools, and skills to individuals, organizations and communities to empower sustainable transformation.

Designed by illuminatheme.com. Powered with WordPress